The last time you and I talked we were in the village and wondering where to spend the night. The night before burial, gravediggers- strapping young Luo men, shirtless and high on illicit brew (chang’aa) – will dig the grave under the soft glow of a lantern. The banter that ensues by the graveside is hilarious! You know the way guys become famous for doing lame Luo stand-up jokes on Churchill Live? Now picture a group of guys who are not acting, who haven’t rehearsed their punch lines but just churn such serious original jokes in mother tongue, complete with the accent. The expression “#dead” was coined from guys laughing so hard at these jokes until they fell in those open graves. This is where you will find me spending my night at funerals, because it’s unending comic relief without commercials.

This is the part that I hate the most in funerals, disco matanga. The loud music that the youths play in funerals. To me it create an environment and provide opportunities for adolescents to engage in risky sex and promote HIV/STI transmission. Wife inheritance also occurs at these events. The purpose of the disco matanga or disco funeral is to help raise money in order to give the deceased a proper burial. There is usually a specific way to raise money at these events. At the event that I attended, fund raising began with music playing and an Emcee who started the party, ‘If you are sitting, you either have to pay 20 Kenyan Shilling or go out or dance’. Those who want to continue sitting on the bench have to pay 20 Kenyan Shilling (KSh), while those who don’t want to pay, get off the bench and dance. This trend continues throughout the night. The microphone also gets passed to a person who would pay for a dance or suggest for a named individual to dance with them for one song.

Cows, chicken and goats will die in a Luo funeral. There isn’t githeri anymore but chapatti and mandazi. So the meal of the day is meat and ugali and fish. Nobody will touch the vegetables because in your folks home vegetables are for the poor. Sodas are in high demand. Especially Fanta. Eat while you can because you don’t know when you will eat such delicacy again. Dress appropriately, especially if you have a plus size body and you are light. This isn’t the fashion high tea. Don’t show off your belly ring. No short things. No tight things. But you can rock a floppy hat if you want; just make sure you cock it to one side, because really, Frank Sinatra encouraged all to cock their hats because “angles are attitude.

You will be struck at how wasteful our funerals are. How arduously long they are. How unnecessarily expensive they are. You might wonder how, in such poverty-stricken homesteads, they can still afford to splurge and stretch thin on already meagre resources. We, the young generation, wonder too but nobody really can change this overnight because funerals aren’t just a family affair, it’s a community affair organized by the elders and the church members. We don’t get to vote.

The saddest part of Luo-funerals isn’t when the body is lowered in the grave. The saddest, most anguishing part is the days after the burial, when everybody has gone back to the city and to their lives and the homestead, now only left with are the bereaved, sit still and silent. This is the time an ominous uncertainty of the future hang over the homestead. This is the time it all sinks in.

This is when the bereaved come to the realization that, that they have to deal with their pain alone. It’s a dark excruciating time; so dark even the animals in their sheds hang their heads in sorrow and the dew on the leaves take forever to evaporate, which makes them look like they are weeping too. This is the time to visit a Luo and mourn with the family, not when the mourning is clouded in funeral politics and razzmatazz. Your presence counts then. Plus you will get a warm bed, you will not be bathing in a nearby river or Dam and you will also get a matching bathroom sleepers.

Luo funerals have become the butt of many jokes and rightfully so. Maybe things will change, and things have to. But for now, the Luos send off their dead the way they lived their lives; colorfully, loudly and with intemperance. 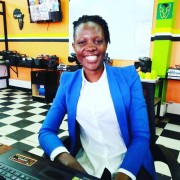 I am not Tethered to my Family Tree

There’s more to chase in life.

Thank You for Bringing Me Out into The Light

I’m Breaking Up with You

You speak to me through feathers

Please consider supporting us by disabling your ad blocker